In this article, I would like to introduce ALPHAOMEGA’s “Shibuya Rin -Triad Primus Ver.-“. 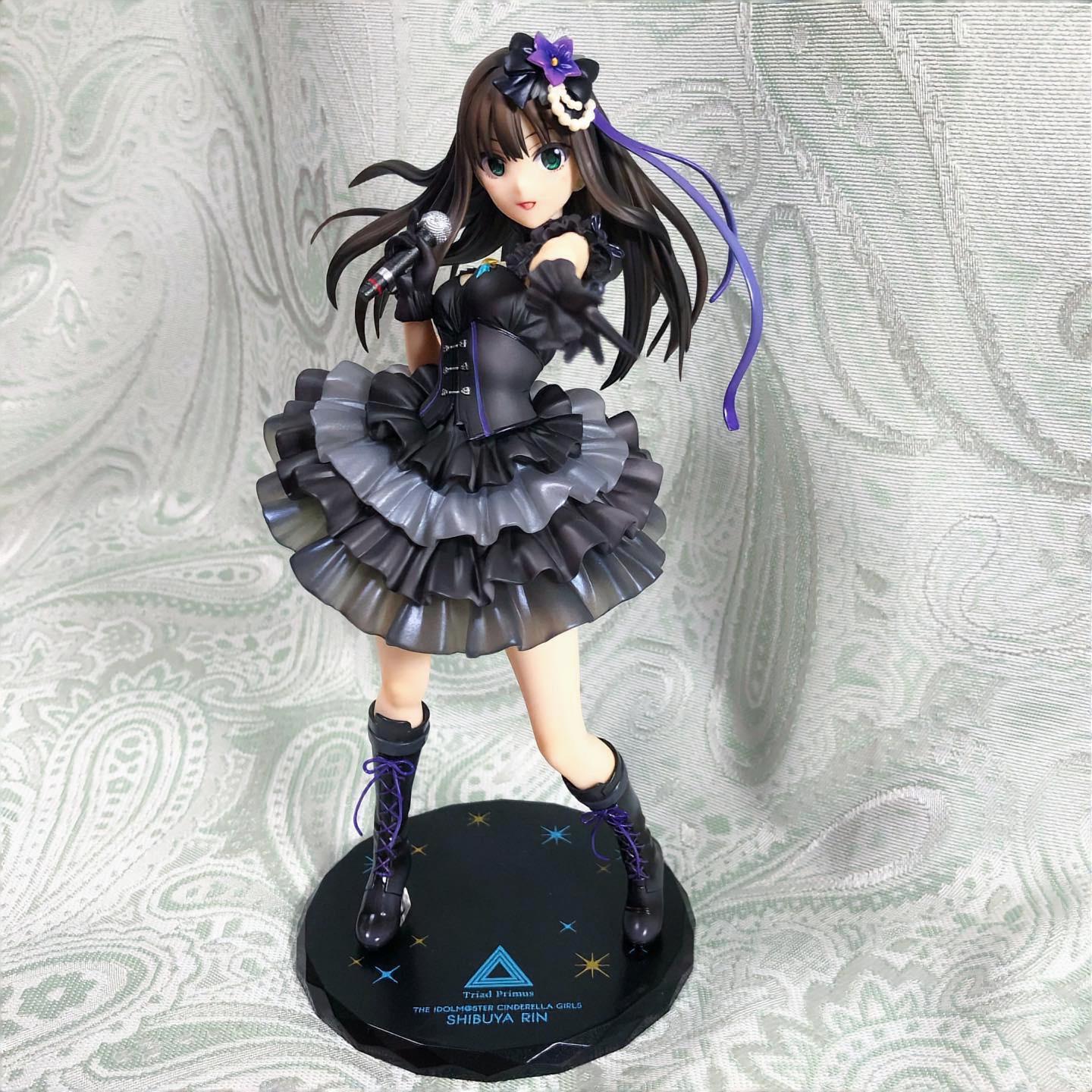 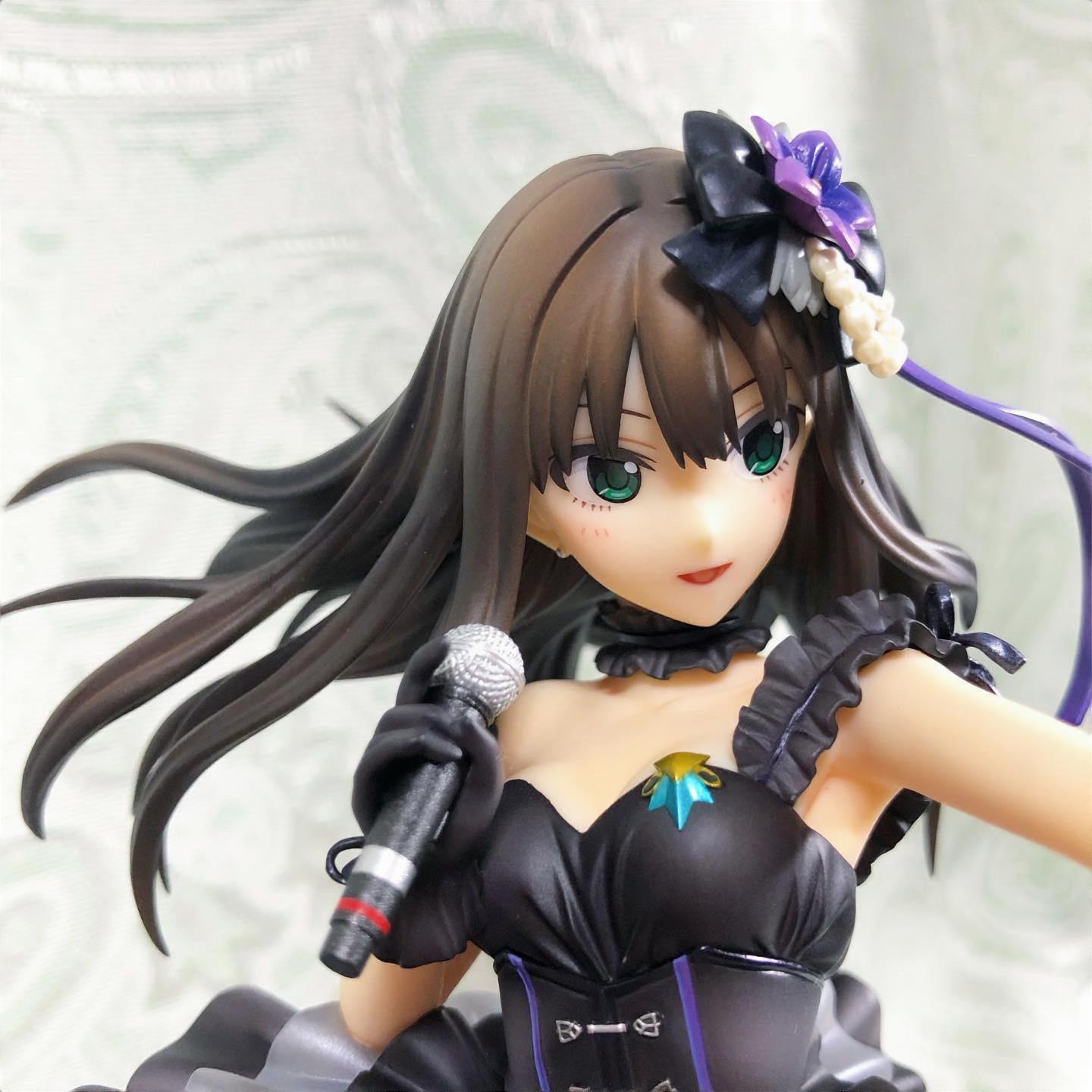 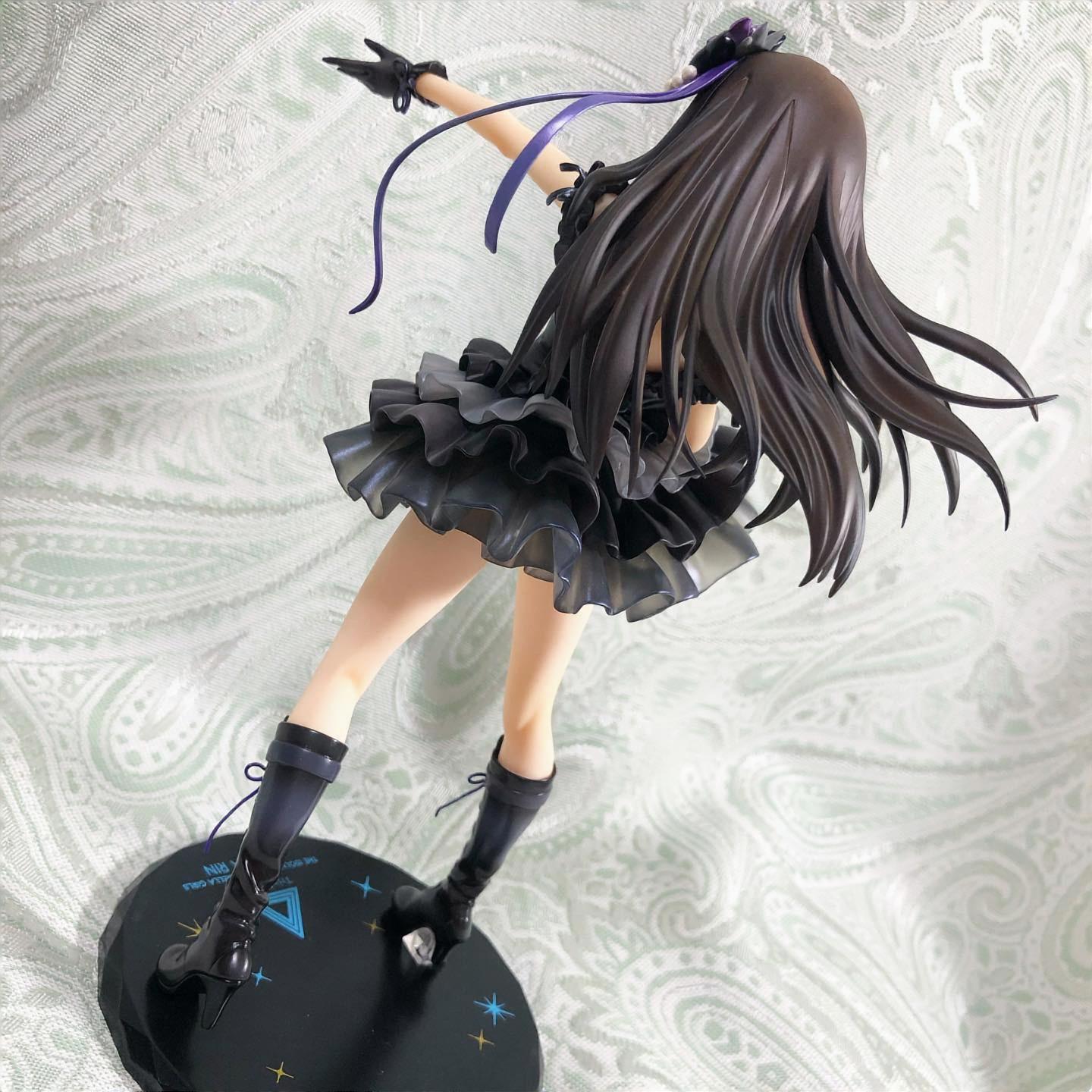 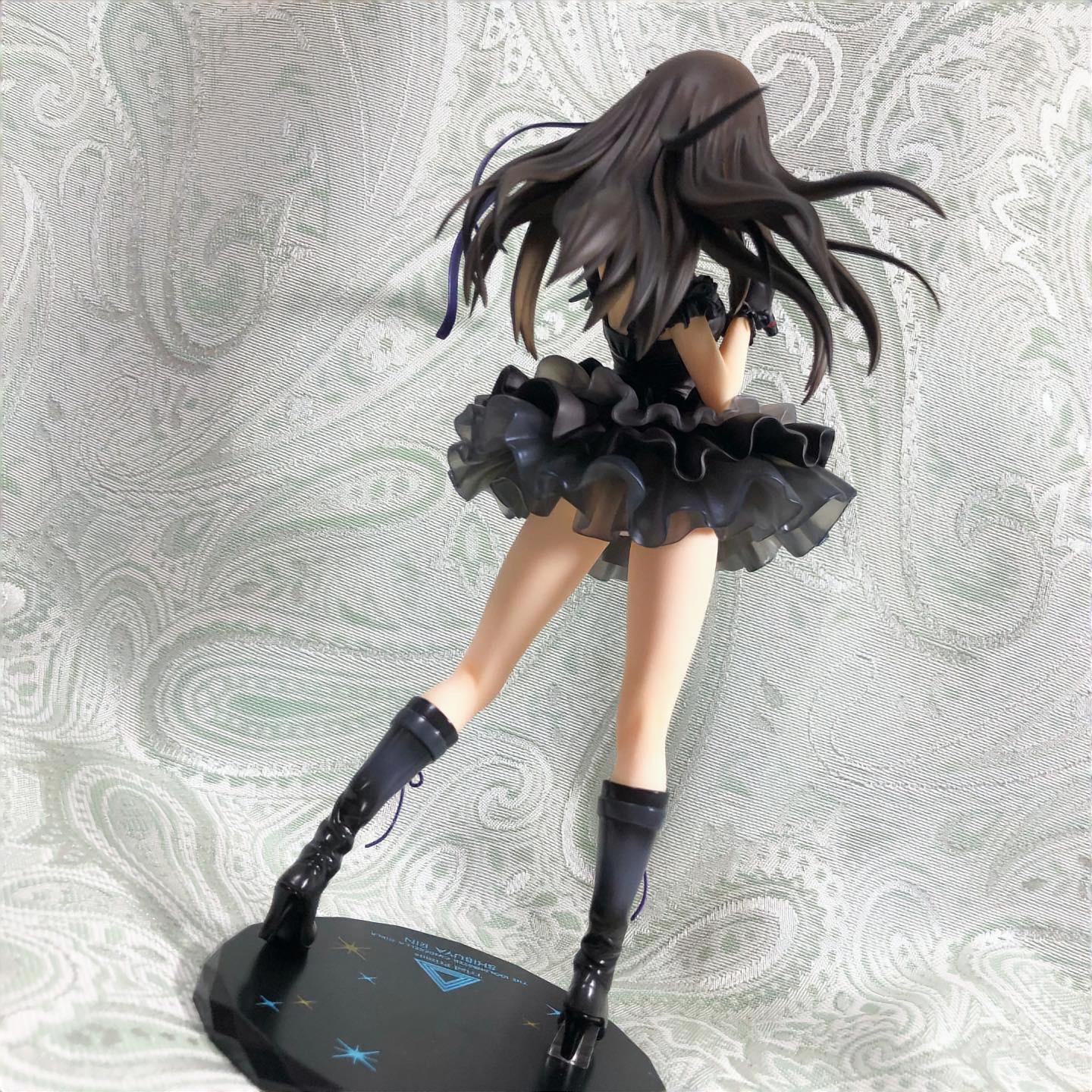 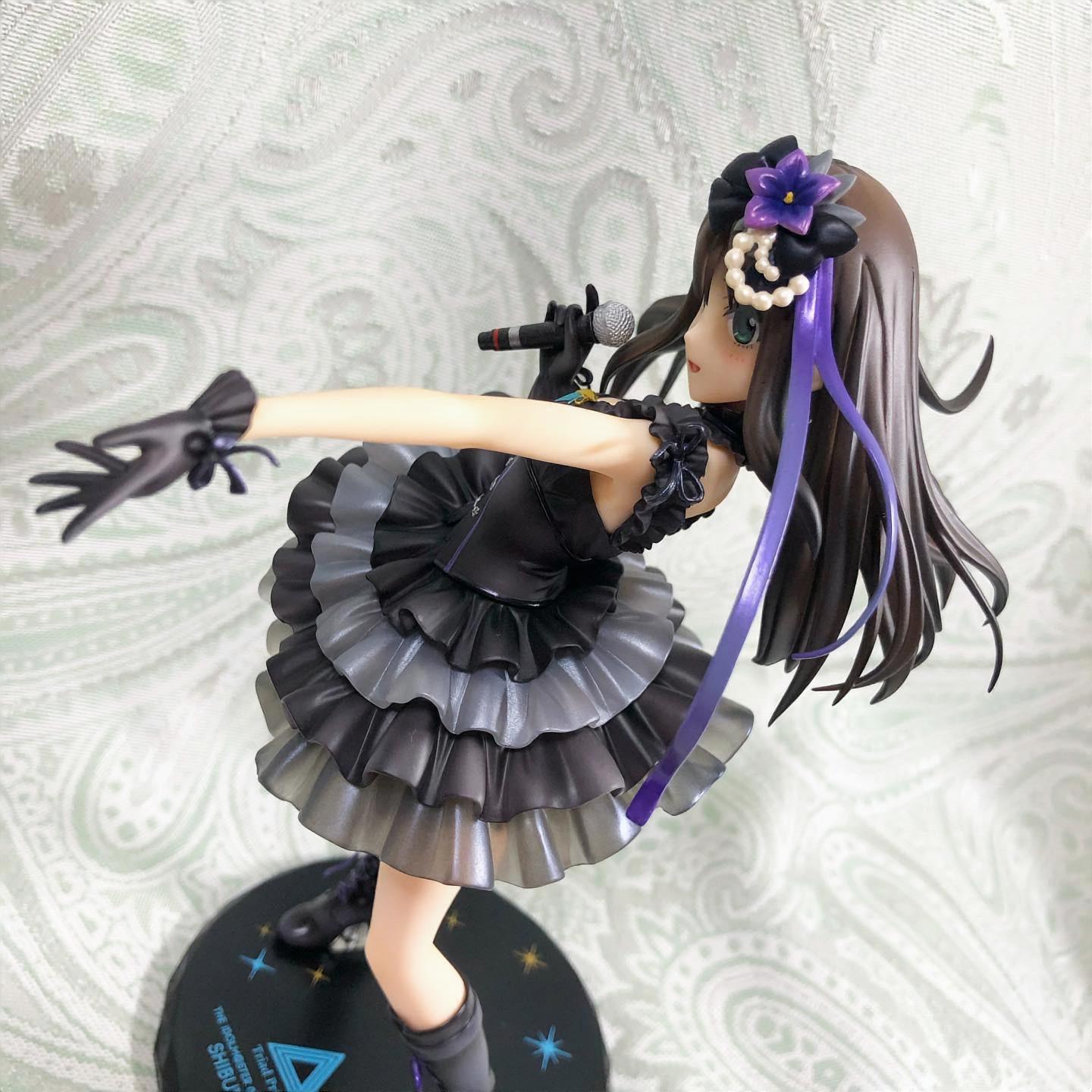 This figurine’s costume is from the game and the anime of “THE IDOLM@STER CINDERELLA GIRLS”. It’s a costume from the unit she belongs to, “Triad Primus”.

The whole is really a complete set! As her name suggests, the word “dignified” is a fitting description! I think the white, purple, and blue accents on the black-based costume are a nice addition to the atmosphere.

I’ll give you three of my favorite things about this figurine!

First, let’s talk about the shape of the fluttering hair.

The hair is recreated in such a fine and supple way, right down to the tips of the hair. The tips of the hair are progressively thinner and thinner as they follow the flow of the hair, so even from a distance, you can see that it’s been carefully crafted. In addition to the many, many layers of hair strands, there are even more steps in the areas where there is a large amount of hair, giving it a strong sense of motion and movement. 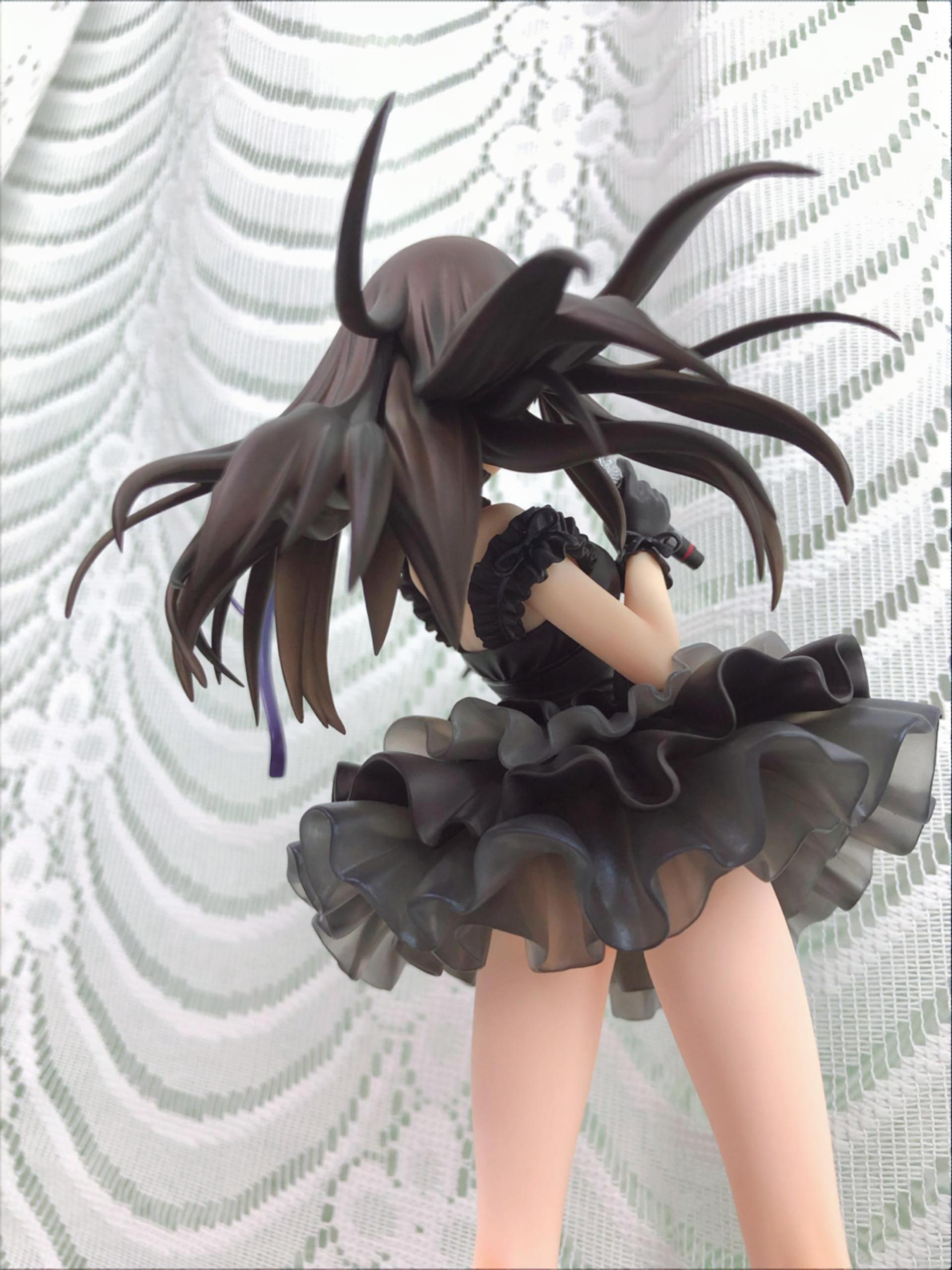 The detailed carving gives the hair a variety of shine when the light hits it, making it look as if it is really fluttering. She has her hands stretched out in front of her, so her hair looks like the wind is blowing through her front, which I think gives the whole figure a cohesive look. You can really feel the air of the stage she’s standing on!

Second, let’s talk about the creation of the costume.

The first thing you’ll notice is the ruffles! The skirt has four layers of ruffles from the outside, but there are actually shorter ruffles in the skirt as well. That’s an awesome detail! 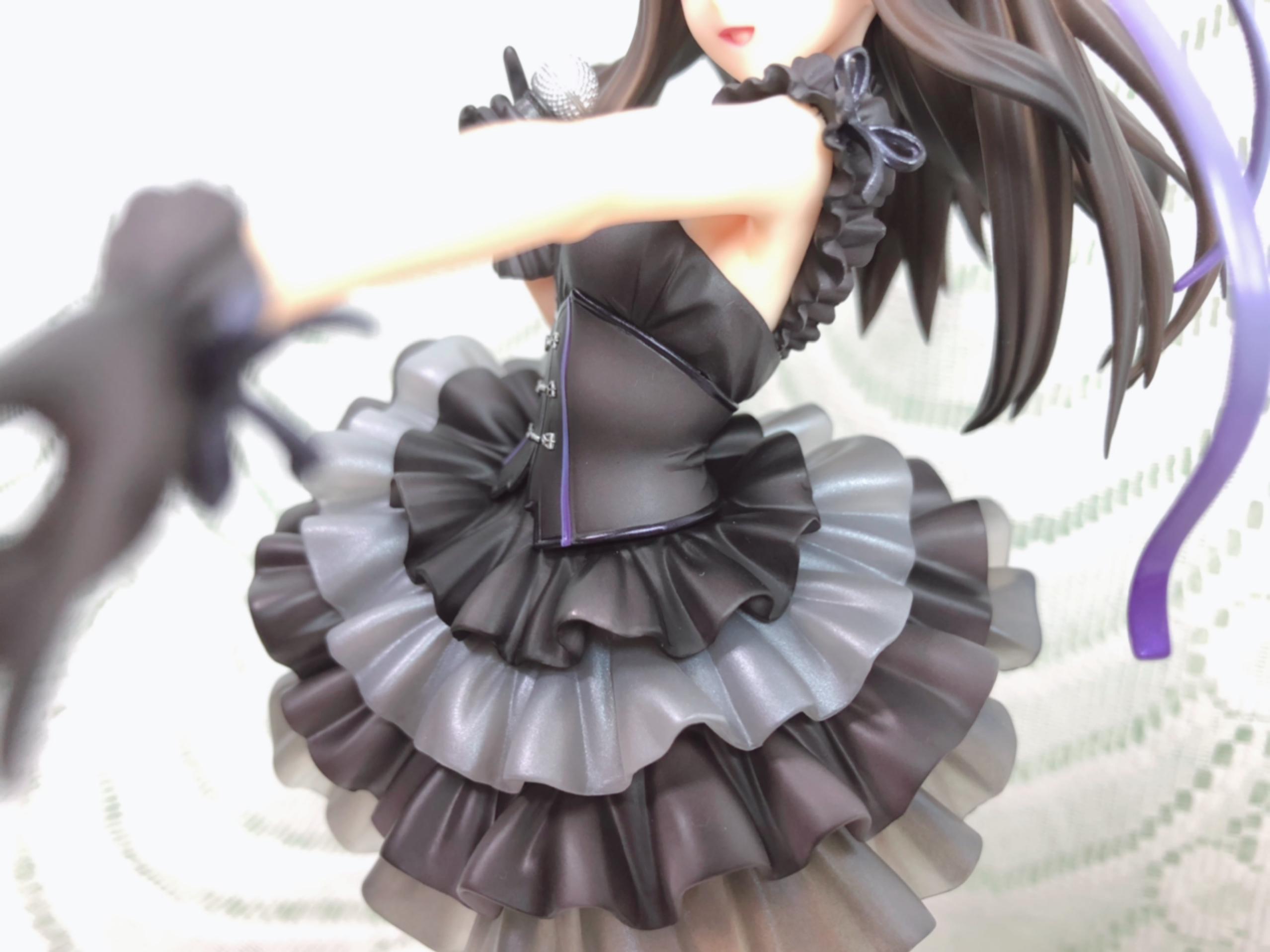 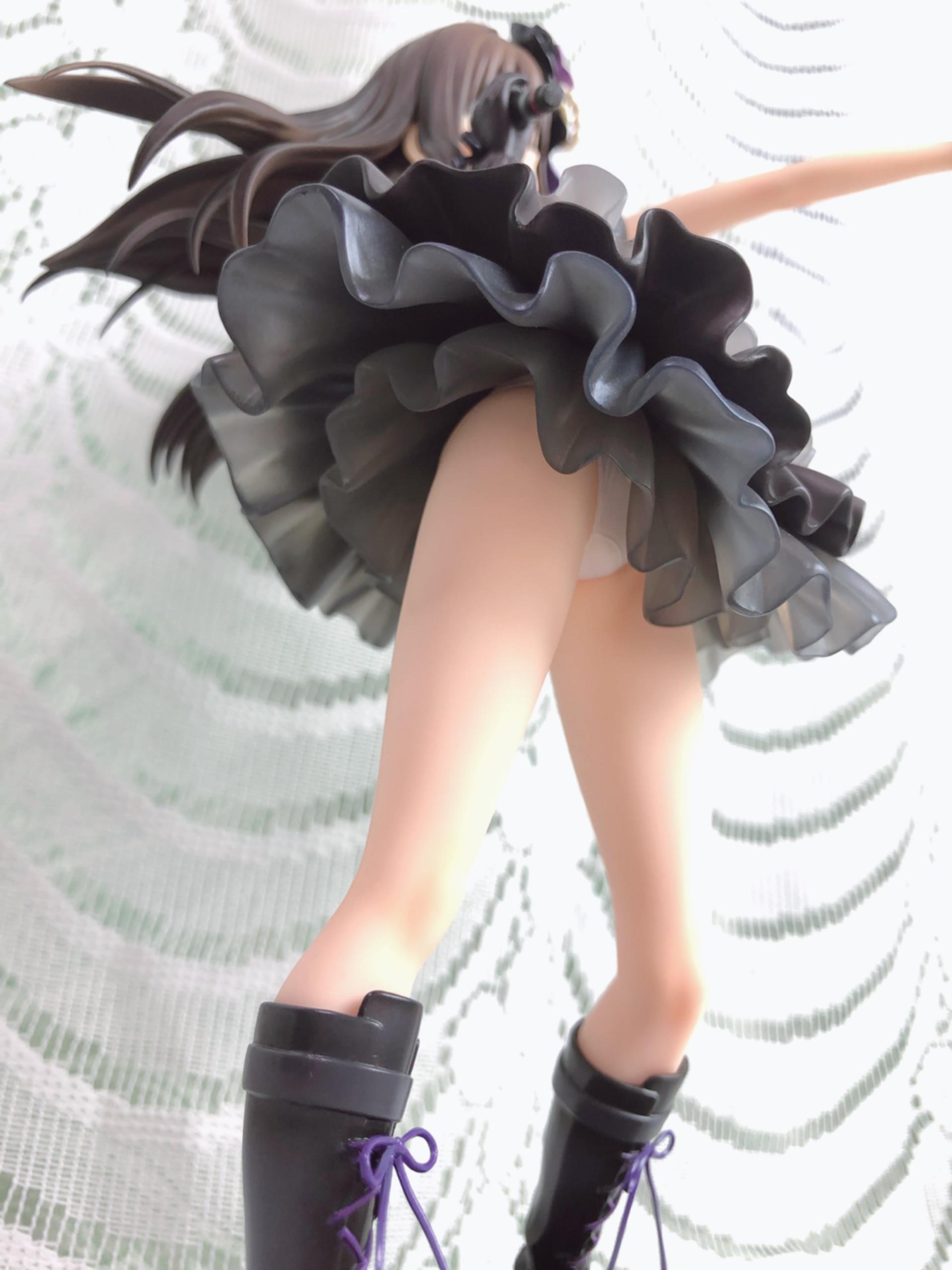 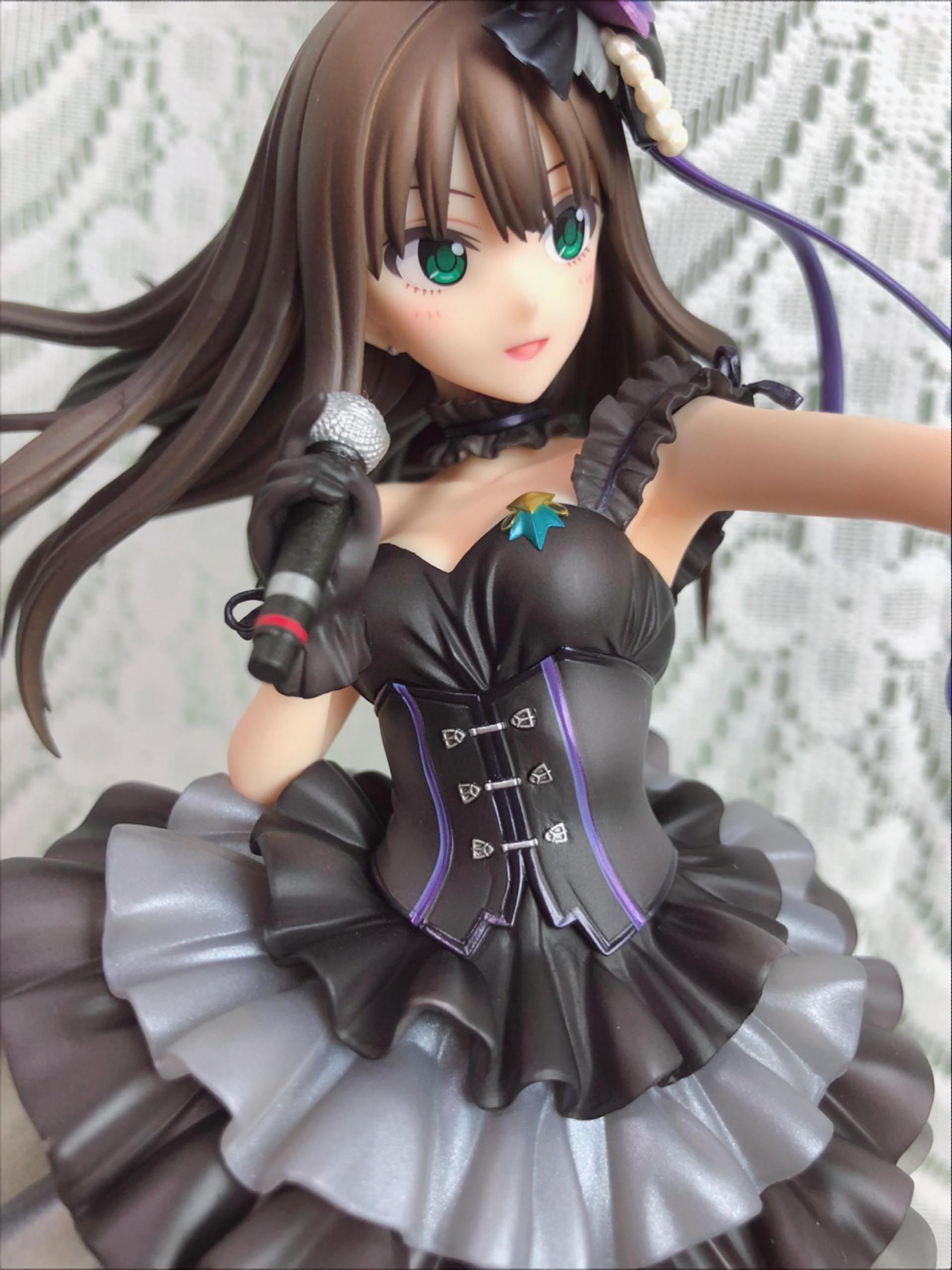 There are a number of wrinkles etched into the costume, even outside of the skirt, which gives the fabric extra texture. 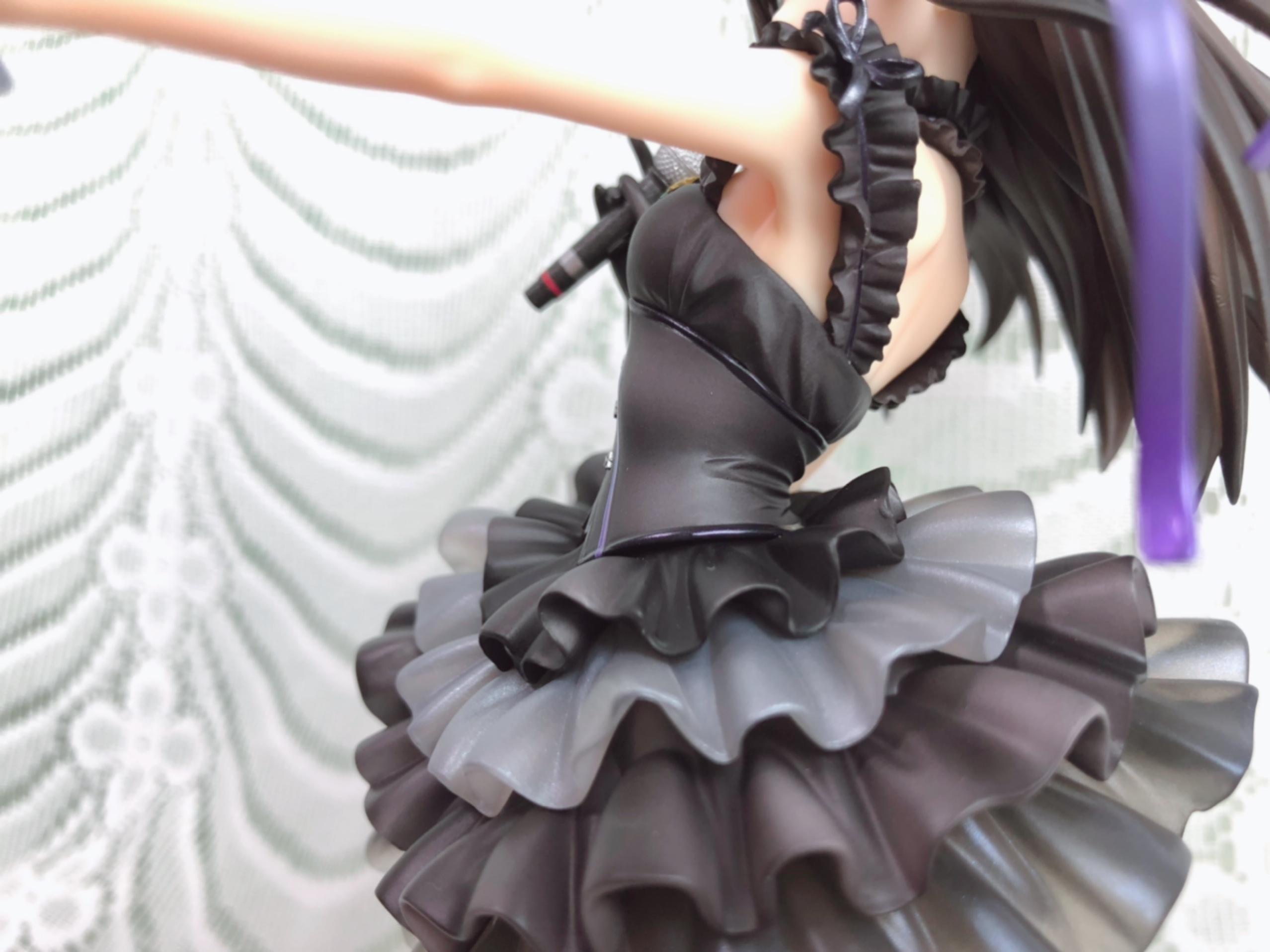 I believe it’s details like this that affect the overall perfection of the piece.

Next, the smaller and defined parts! The laces on the boots, the silver hardware on the body, the brooch on the chest… It’s remarkable how they can mass produce such delicate things. 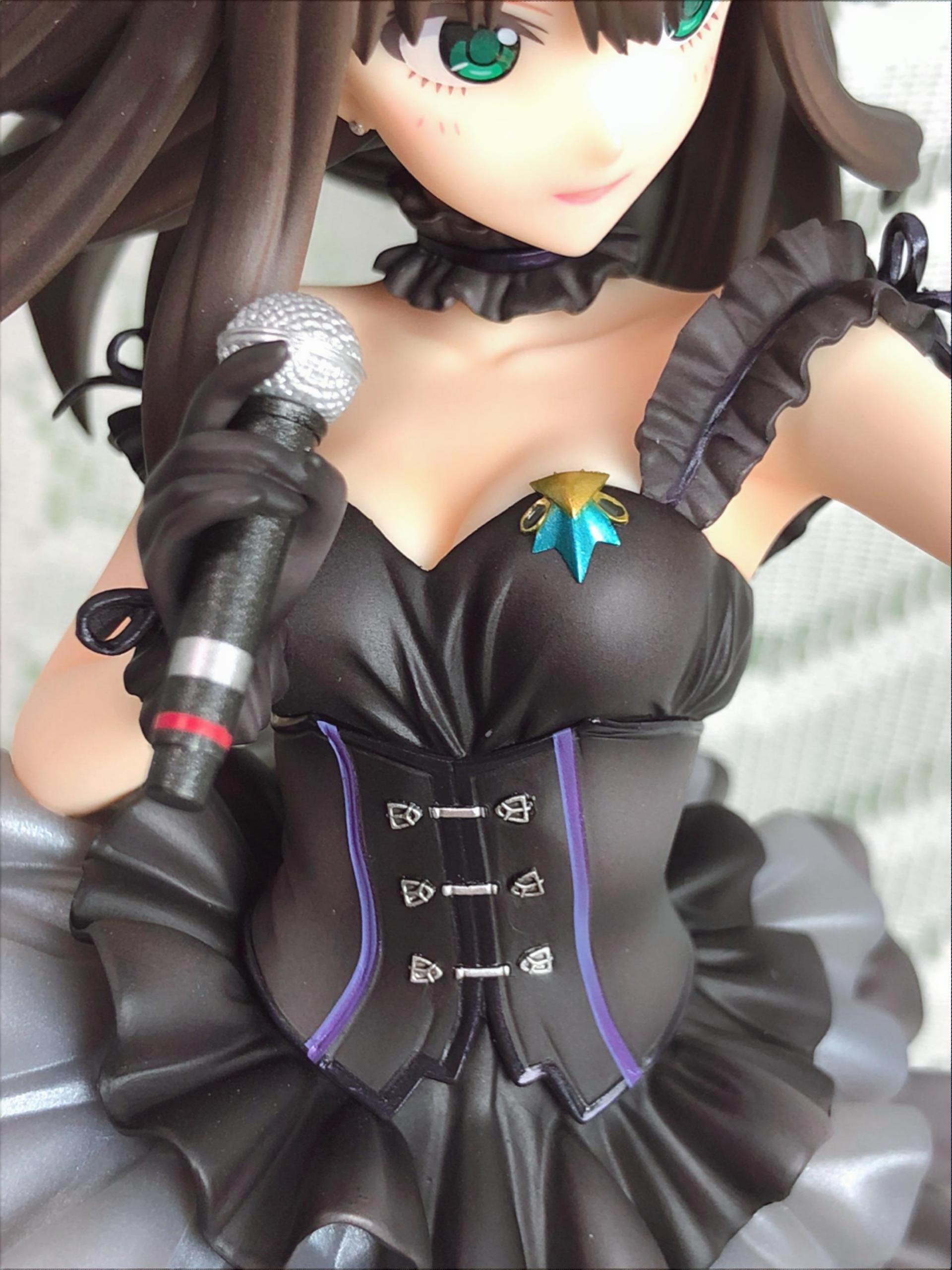 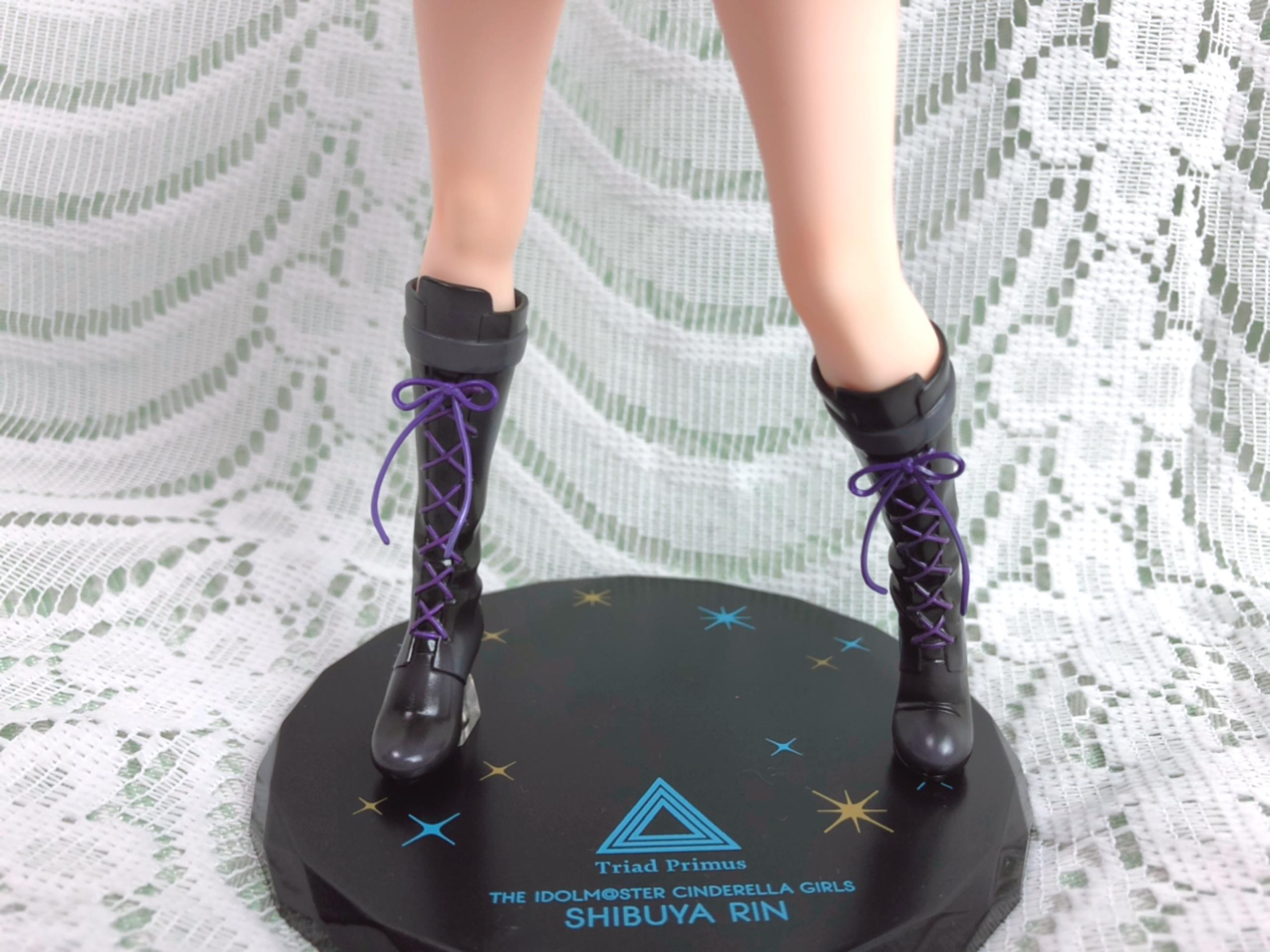 There’s one part I don’t want you to miss. It’s the shoulder straps and the choker. It’s not just frilly, but there’s a width of strings between them. That string is tied into a ribbon knot at the shoulders, which adds to the cuteness of the choker from the side. 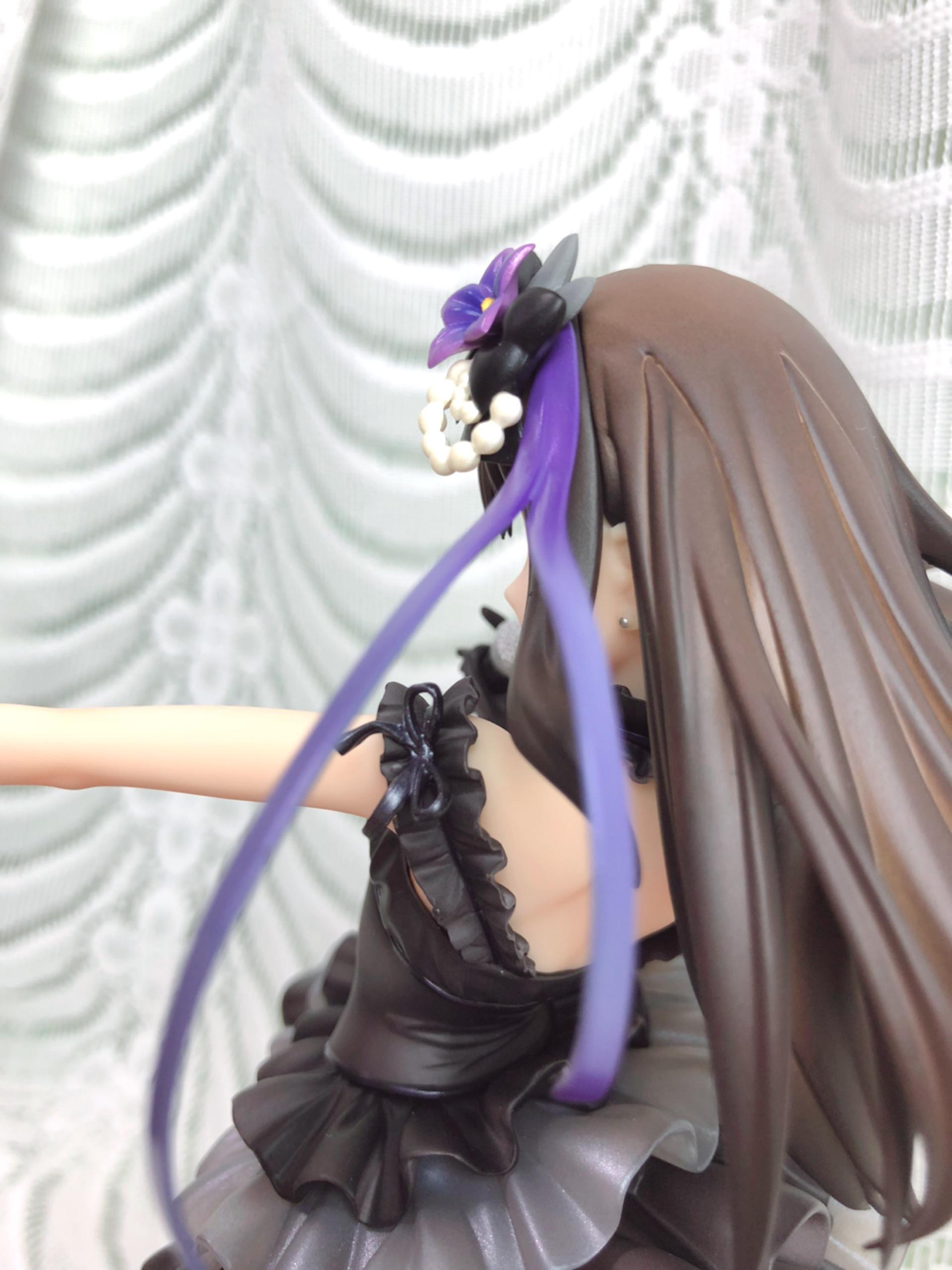 As mentioned above, there are some pretty small parts, such as the boot straps, but the paint job hasn’t shifted at all. The technology and technique to do this is something I can’t believe…

And the presentation of the texture of the costume is excellent. The color selection is delicate, and the difference between the texture of the skin and the costume is clear. I think the gloss has been erased in just the right way, giving it a luxurious finish. Even though the clothes and boots are almost the same color, the difference between the materials is very apparent.

It’s such a carefully crafted figure that you can’t help but forget to take a breath and look at it. To be honest, I’m not a fan of Rin, but this figurine is really my favorite. In addition to the previously mentioned favorite points, I also love the well-fleshed out, soft looking legs that extend out of the spread skirt. I think these leg lines are unique to female characters, so I’m glad they were made well. 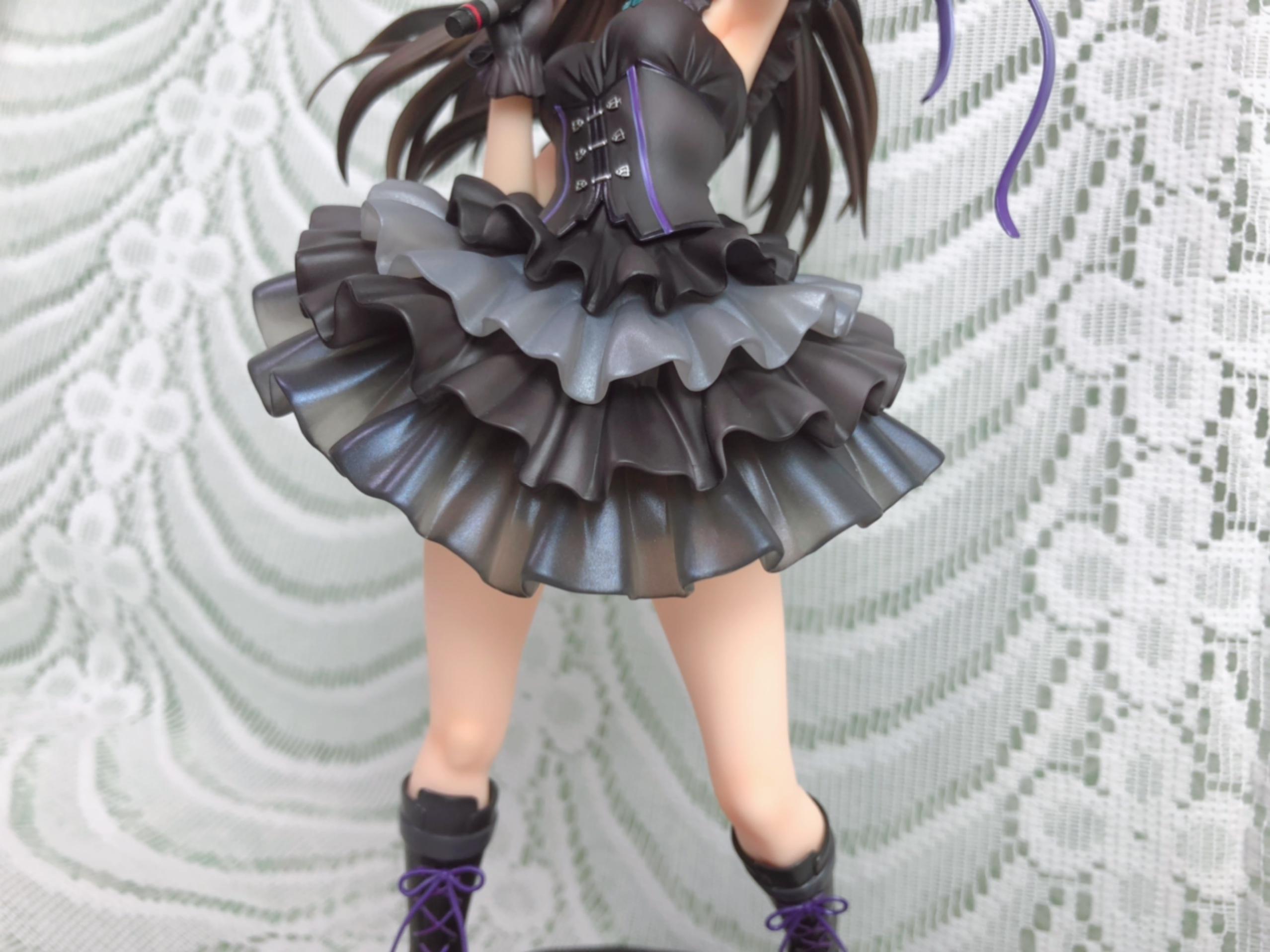 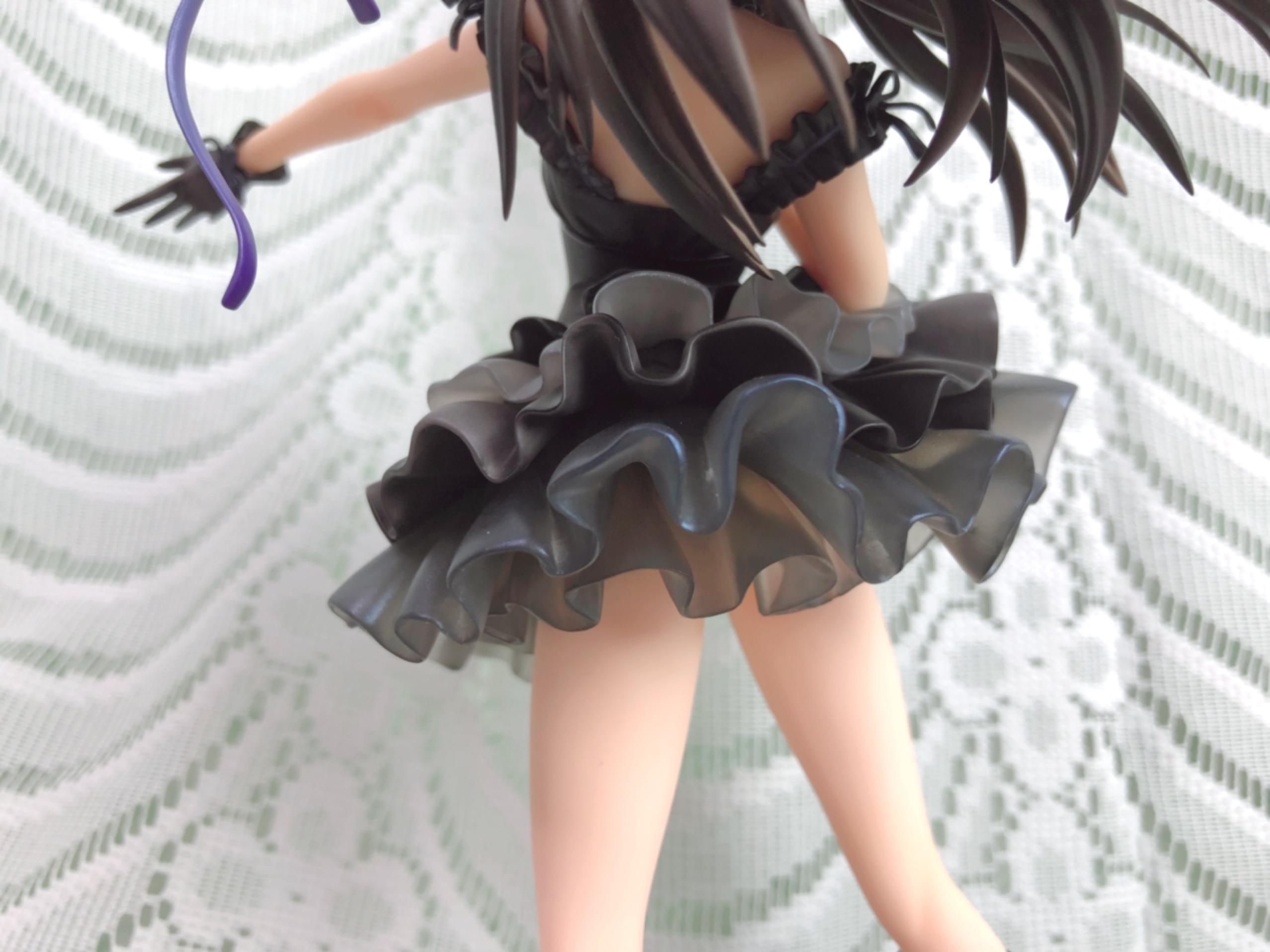 ALPHAOMEGA is a brand that is a collaboration between figure maker ALTER and MegaHouse. As expected, I thought, there’s only so much Alter is involved in this one! 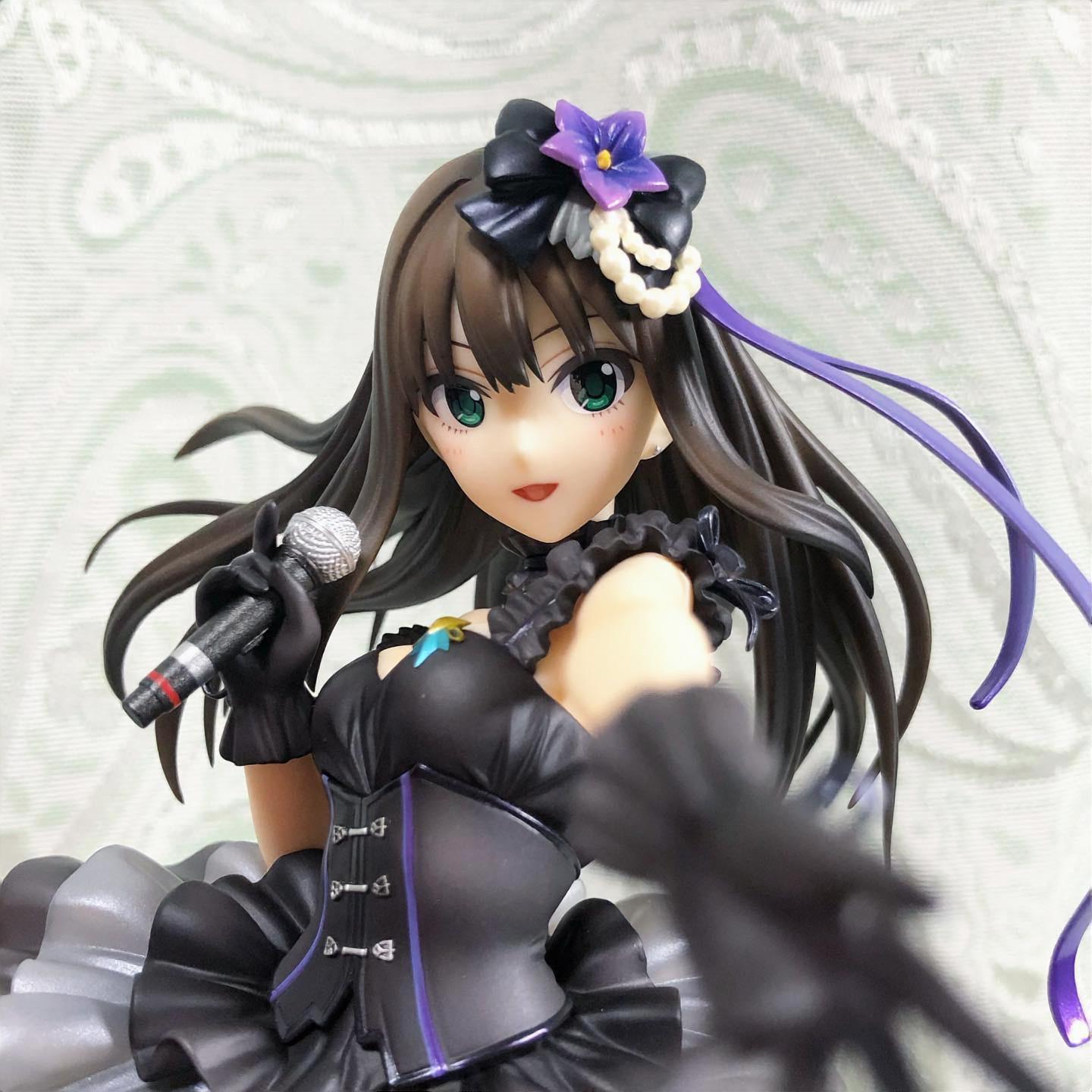 That’s it for ALPHAOMEGA’s “Shibuya Rin -Triad Primus Ver.-“. Thank you very much for your time!

In this article, I would like to introduce GOOD SMILE COMPANY's "Madoka Kaname ~The Beginning Story / The Everlasting~"

In this article, I would like to introduce GOOD SMILE COMPANY's "Homura Akemi ~The Beginning Story / The Everlasting~"